God has said in the Quran about one of the evil unbelievers who forbade the Prophet Muhammad, may the mercy and blessings of God be upon him, from praying at the Kaaba:

If we look into the skull at the front of the head, we will find the prefrontal area of the cerebrum (see figure 1).  What does physiology tell us about the function of this area?  A book entitled Essentials of Anatomy & Physiology says about this area, “The motivation and the foresight to plan and initiate movements occur in the anterior portion of the frontal lobes, the prefrontal area. This is a region of association cortex...”[1] Also the book says, “In relation to its involvement in motivation, the prefrontal area is also thought to be the functional center for aggression....”[2] 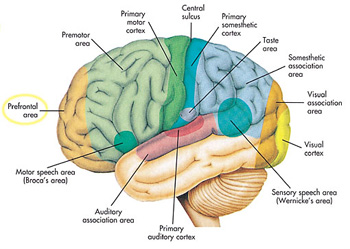 Scientists have only discovered these functions of the prefrontal area in the last sixty years, according to Professor Keith L. Moore. [3]

[3]Al-E’jaz al-Elmy fee al-Naseyah (The Scientific Miracles in the Front of the Head), Moore and others, p. 41